How a DNA match led to finding Agnes's older brother, Thomas Cahill. Or is it Carroll?

Thomas John Cahill was born on 26 August 1866 at Black Creek (near Singleton), NSW. He's the eight of the eleven children of James Cahill and his wife, Eliza Dunn. Agnes was the next child born. Cahill family historians have been searching for Thomas for years. In May 2018, twelve trees on ancestry.com.au showed Thomas but none included any details of Thomas's life after his birth. We did think that Thomas was alive at the time of his mother's death in 1890 as he's recorded on Eliza's death certificate as "living" and aged 25.   Genetic genealogy is a tool that I'm using more and more in my family history research. In August 2017, "ER" reported as a match to me and other "Cahill/Dunn cousins" at AncestryDNA. ER's predicted relationship to me was 4th cousin ie predicted that we shared 3rd great-grandparents. I messaged "ER" a number of times but, as is too often the case, no response. "ER" did have a small t
Read more

Over the last five years, we've used traditional and DNA research to find out more about the eleven children of  James Cahill  and his wife,  Eliza Dunn . Johanna is their fifth child. She was born between 15 April 1862 and 21 July 1863 in the Hunter region of NSW. In spite of extensive research, we can't find details of the birth, baptism or death of Johanna.  Family of Johanna Cahill When we started our search, we knew that:- Johanna had a daughter, Roseanna Cahill on 15 July 1879. Johanna married Charles Montague on 21 February 1883 in Singleton. Johanna and Charles had a child, Reginald Montague, in 2 February 1884 in Sydney. Roseanna stayed in the Hunter with Johanna's mother and later uncle, James Cahill. Roseanna married John O'Connell (1866 to 1938) on 2 May 1904 in Singleton. Roseanna died on 24 September 1938 in Branxton. During this time, we've found that:- Johanna, a widow, married Dominic Ceci on 14 March 1887 in Sydney. She was know by the given names
Read more

One hundred and forty years after her birth, we've reunited Annie with her Cahill family with traditional family history and DNA research. We're still looking for Annie's brother, Charles. If you are a descendant of any of the Cahill siblings, please use the blog's contact form to see if you can assist in the search. For the last five years, we've been researching the eleven children of James Cahill and Eliza Dunn who were born in the Hunter region of NSW between 1856 and 1870. Johanna Cahill, known as Hannah, was their fifth child. We've been searching for her birth and death registrations. You can read the full story  HERE.   Hannah married Charles Montague in 1883. They had one son, Reginald, the following year. He becomes known as Charles. Hannah, a widow, married Dominic Ceci in 1885. She's then known as Hannah or Minnie Ceci. We can't find any trace of Dominic after 1887. The last trace we have of Hannah is in 1899 Here's the first evidence we
Read more 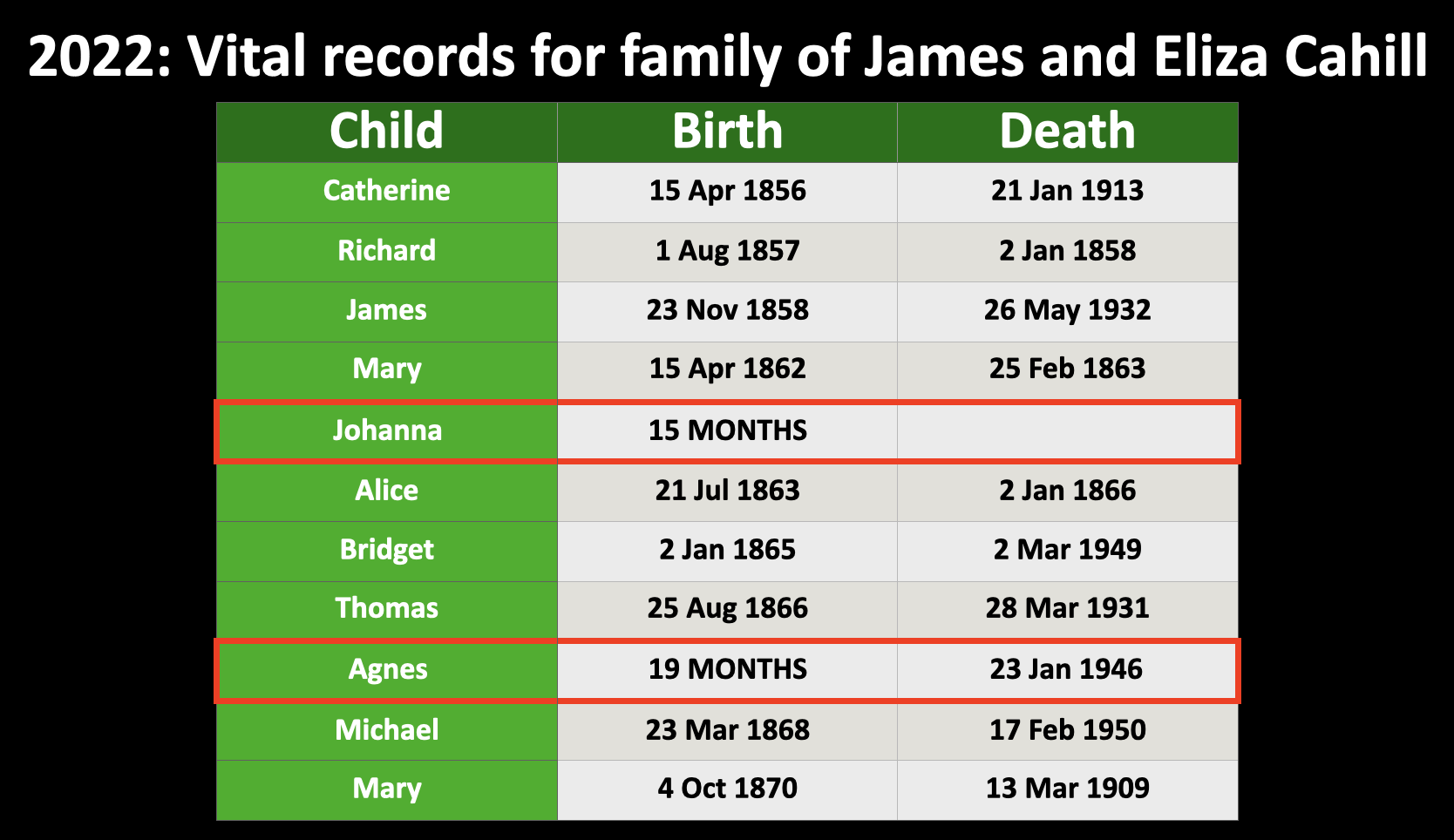 Over the last five years, we've used traditional and DNA research to find out more about the eleven children of James Cahill and his wife, Eliza Dunn . The search continues for the birth and baptismal records of Johanna and Agnes, my great-grandmother. Was Johanna a twin to Mary or Alice? Was Agnes a twin to Thomas or Michael?  We've followed the lives of Bridget, Thomas, Michael and Mary in that time. We've lost trace of Johanna after 1899. If you are a descendant of any of the Cahill siblings, please use the blog's contact form to see if you can assist in the search for Johanna. Johanna (also known as Hannah) was born about 1863 in the Hunter Region of New South Wales. Newspaper reports show that in 1878 she was working for Walter Alexander McDougall (1854 to 1905) who was a grazier. His property was "The Pinnacle" situated near Singleton. Hannah was probably working as a domestic servant as Walter and his wife, Emily Alcorn (1858 to 1939), married in 18
Read more
More posts